“There’s Always A Time To Dance”

Go to tchsdance.com for more information. 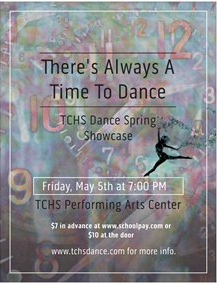 We hope that you will join the Band program at our Spring Concert tonight at 7:00 p.m. in the PAC!  Featured on the concert will be our JazzOne (top jazz band), JV Jazz Band, Steel Drum Ensemble, Color Guard, Freshman Band, Symphonic Band and Wind Ensemble.  The students have worked very hard to prepare a great program for you this evening!  We hope to see you there!

Please plan on attending the upcoming musical, Once On This Island! It is a rousing Calypso-flavored tale of one small girl who finds love in a world of prejudice (http://www.mtishows.com/once-on-this-island). The TCHS Theatre Department proudly presents Shrek, Jr.! This is an entirely student-directed production featuring work from the Advanced Musical Theatre, Puppetry, and Stagecraft classes. It is sure to be a treat for the entire family! 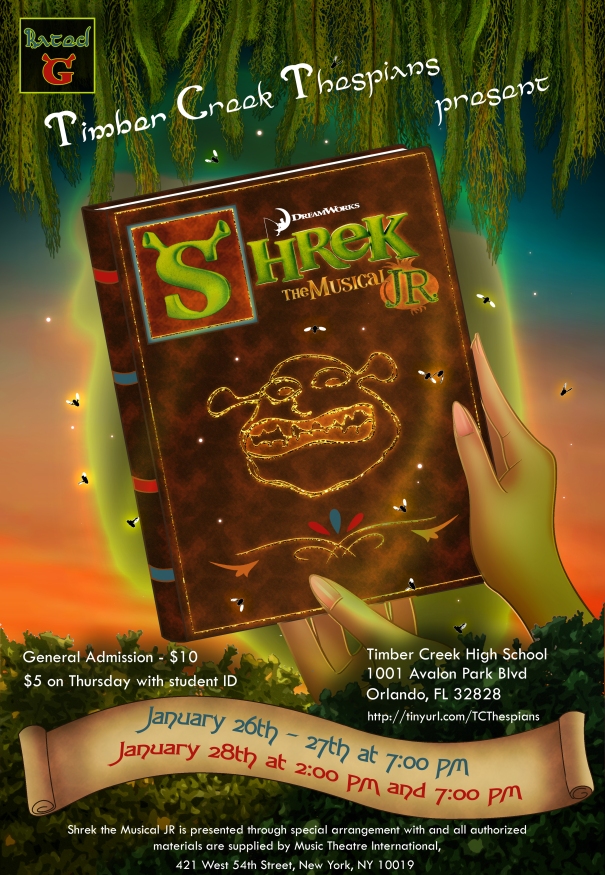 If you would like to order a copy of the 2016 Prism Concert, please use the order form below. You can print and mail in this form, or place an order online or by phone (click the link for the form and order information).

TC Orchestra is performing our annual Winter Concert Tuesday December 13th at 7pm at TC PAC.  It is free admission and includes performances from all of our string ensembles, chamber groups, our full orchestra and our winter silent auction.  We will be premiering music, including one that was transcribed for TCO.  We will have over 150 students performing including TCO Alumni!  It is a festive night and we would love to have you there.  There is something for everyone.  Please join us and bring your cash or checkbook as we have over 125 items in our silent auction ranging from $10 to over $500 in value!!  It is for a great cause, supports our students’ hard work, and is a fun evening of great music. 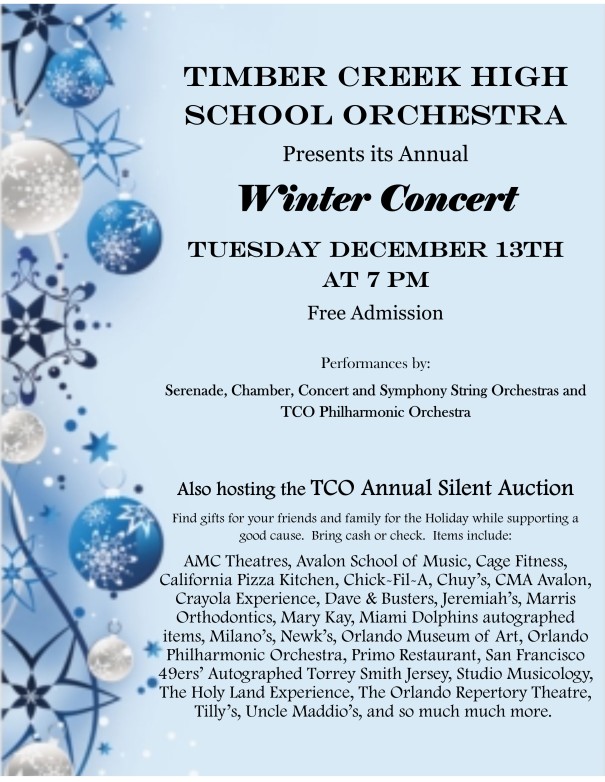 With our dress rehearsals complete, we feel confidant in saying that this year’s Prism is going to be wonderful! The students have been working extremely hard, and they are thrilled to show you the final products. If you are not excited yet, hopefully you will be after looking at the following preview photos: 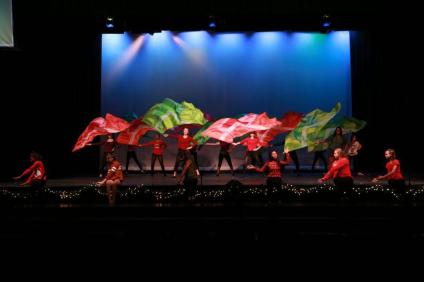 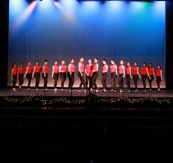 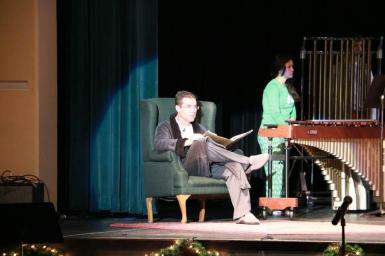 The Timber Creek HS Performing Arts Department proudly presents “Holiday Memories,” our annual Prism concert! Featuring performances from each of our outstanding programs, this holiday spectacular is sure to be a fun-filled event for all!

Tickets: $5 on schoolpay.com. ***After you purchase, you must print the receipt to show when you enter the PAC.

Congratulations to our Theatre students on another successful district competition! Our results are below:

BinhAn Nguyen – Technical Senior Scholarship (Only 1 of 4 awarded for the entire festival. This is the third year in a row we have taken this award!!)

In all, 13 events rated as Superior and 11 events rated as Excellent (the two highest scores). Our students were amazing on the stage and off, and definitely made Timber Creek proud with both their talent and their attitude.

Theatre would like to invite everyone to their second production of the year, William Shakespeare’s The Tempest. The show is 40 minutes long, and contains music, media, and puppetry, so it is a great “starter” Shakespearean play for those with middle school children. We have showings tonight, Friday, and Saturday at 7pm, Tuesday at 6pm. OCPS employees are always free.

7pm in the Timber Creek Auditorium

For the past 12 years, Prospera, the Sorceress and rightful Duchess of Milan, and her daughter Miranda have been exiled to an island. By conjuring up a storm, the tempest, she plots for revenge on her brother Antonio who usurped her throne, and lures him along with the complicit King Alonso of Naples to the island. With the help of the magical island creatures in her thrall, the sorceress attempts to avenge those who betrayed her by casting a series of spells. Join Prospera as her ploys bring about the revelation, redemption of the King, and the marriage of Miranda to Alonso’s son, Ferdinand. 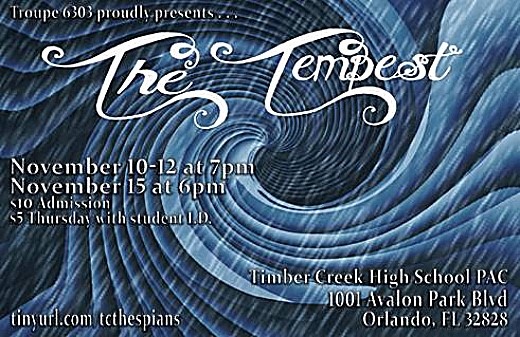 The past month has been a very successful one for Timber Creek Performing Arts!

Band had a wonderful fall concert that featured a number of hit instrumental pieces, including a selection from the Regiment’s fall show. In addition, Regiment received Straight Superior ratings at their District Assessment!  The program received this distinction for the 16th consecutive year.  We are so very proud of our students and their efforts on our school’s behalf!

Chorus had a very successful fall concert where they performed songs dealing with the theme of Passion and Compassion: life, joy, and using what you love to do to help others. Several students also sang in honor choirs hosted by the Festival Singers of Florida, a professional level choir consisting of members from across the state of Florida. The students accepted to this honor did a wonderful job and sang in a concert that helped raise money for the One Orlando Fund. In addition, several students participated in the Florida American Choral Directors’ Association Male Honor Choir and Senior Honor Choir, which featured a wonderful concert of men’s choir music and a performance of Mozart’s Requiem with orchestra. Finally, we are pleased that three of our students were accepted into the All-State Choirs that meet in January in Tampa, a high honor considering the rigorous process that all students must go through in order to qualify.

Orchestra had a wonderful Halloween-themed fall concert! The students played spectacularly. They have also organized several performances around the school to enrich the days of the students at Timber Creek. In addition, we have several students that were selected to participate in the OCPS All County Orchestra this Thursday through Saturday.  This is a great honor and we are very proud of our students.  The concert is on Saturday, 11/12 at 4 pm at Cypress Creek HS with free admission. Congratulations to these outstanding musicians!

The TC Elite Dance Team received straight superiors this past weekend at the Orange County Dance Expose; one for a faculty choreographed piece and two for student choreographed pieces.  We are very proud of the team!  They not only showcased their beautiful talents, but handled themselves like professionals.  In addition, several students were chosen to be a part of All County Dance, the highest honor in Dance in our county.

Theatre‘s performance of Lend Me a Tenor was hilarious and well-crafted, displaying the outstanding talent this program boasts both onstage and behind the scenes. They have been working diligently to prepare their acts for the District Showcase coming up next week, where students will perform numerous small and large ensemble numbers, including a presentation of the upcoming production of William Shakespeare’s The Tempest.

About Our Performing Arts Department

Timber Creek High School is proud to lay claim to many accomplished performing arts programs. Currently, our programs include Band, Chorus, Dance, Orchestra, and Theatre. All of these programs are open to every Timber Creek student, with higher auditioned groups for advanced members. Timber Creek also has its own Tri-M charter, which is a nationally recognized performing arts honor society. We thank you for visiting our site, and if you have any inquiries about programs, feel free to contact us.